How tragedy split a former Lapworth family who “went forth and multiplied” around the world. Sent from Lapworth to Canada at the age of ten and nine – but their families kept in touch.
A query from the grand-daughter of a former oldest resident of Lapworth, then living in Leicestershire, has evoked memories of a family which was split up by domestic tragedy in the early years of the last century.

Mrs Catherine Maullin, living in Desford, wrote to the magazine:

“When young we used to catch the train from Acocks Green to Lapworth; then over the fields towards the Boot Inn. If the grown-ups needed a drink we children sat on the verge (no children allowed inside), then up the Warwick Road to where Pound Cottages were. There lived Grandad Samuel White, who lived to be 98 and at one time was the oldest resident in Lapworth. He rode his bike well into his 90s to collect his pension from Hockley Heath.

“Life was not easy. Alice, his wife, died in 1905, leaving five sons – Harry, Albert, Edward, George and Sidney, my father, who was born in 1903. Samuel was a former cavalryman whose father had been head gardener for the Earl of Dudley who became Governor General of Canada. He and Alice (nee Taylor) had met in Birmingham; they came to Lapworth where he worked on the canal as a lengthsman and lived in Canal Cottage.”

Mrs Maullin adds the family would like to find out how old Alice was when she died; in 1906 the two eldest boys were sent, aged 10 and nine, from Middlemore Orphans’ Home to Canada, to help ease farm labour shortages in the early years of the century. They were separated, and after three lonely years Harry “ran off” looking for Albert. Together they hopped a freight train, but in jumping off Harry slipped and his left arm was severed by the wheels.

Eventually they found work in Nova Scotia, where their families still live (Harry’s grandson Bruce, one of 25 grandchildren, being the third generation to work in a Liverpool paper mill there). In a newspaper interview Harry laughed: “A hard life ? Well, we made out. I was strong; I could dig 70 barrels of potatoes a day; I could lift my side of a full barrel; with a rope sling I could handle a wheelbarrow. I could harness horses and peel logs…”

While serving in the Canadian Army during the Second World War Harry and Albert’s sons were at long last able to visit their grandfather; Mrs Maullin found strong links when she visited Canada: “It was interesting to find that I was greeted with ‘Well, well, well’ – a favourite expression of Grandad’s which his sons never forgot and which they passed on to his grandsons, now in their mid- to late 70s. I have visited the graves in Liverpool, Nova Scotia and feel more content.”

Edward had drowned in the canal at Lapworth in 1907, aged five; Mrs Maullin has the baptismal certificates of Edward, George and Sidney, all signed by Rector Frank Bell. She and the family would like to know where Canal Cottage stood (was it one of the old Pound Cottages ?) and where Alice, Edward and Samuel are buried. George (as George Robert he was called Bob) followed a family tradition by becoming a gardener; he and his wife died within two months of each other in Bewdley after celebrating their golden wedding in 1987. Sidney, born in 1903, “was looked after by a family called Moseley and went under that name for a few years, not knowing that George (called Bob) was his brother.

“Mrs Moseley died and Mr Moseley re-married”. Sidney became a regular soldier in the Coldstream Guards at the age of 16 and went to Turkey and China; he left the Army in 1930 and had two children – Catherine (Mrs Maullin) and Stephen. Recalled to the Army during the Second World War, he served in India from 1940.

On demobilisation in 1946 he worked for Birmingham Parks Department until retiring. He died in 1981, aged 78; his Army life included the unusual co-incidence recalled below.

How did the former Bishop of Birmingham meet the guardsman from Lapworth in Constantinople in 1923?

This seemed curious; Charles Gore was the distinguished first Bishop of Birmingham when the Diocese was founded in 1905 but in 1912 became Bishop of Oxford, from which office he retired in 1919. Why were he and Sidney White in Constantinople in 1923?

A little research threw up an interesting co-incidence. Sidney White had joined the Coldstream Guards at the age of 16 and served in Turkey. In his Life of Charles Gore: a great English-man Dr G G Prestige writes: “In the spring of 1923 Gore spent some months in Eastern Europe…to qualify himself for more effective service on the Archbishop [of Canterbury]’s Eastern Churches Committee”.

Gore’s diary records that in Constantinople he visited the Patriarch, preached at the headquarters of the British Army of Occupation, inspected St Sophia and other places of interest, “all thrilling.” He also confirmed four soldiers – one of whom would have been Guardsman White, one of his former flock.

It is interesting to speculate whether Bishop and soldier conversed about the Midlands – or even, perhaps, about Lapworth…

END_OF_DOCUMENT_TOKEN_TO_BE_REPLACED 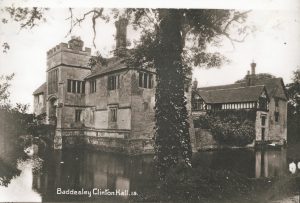